The dress that broke the internet

Last week the internet divided into two vociferous factions – all over the colour of a dress!  Not since Monica Lewinsky’s infamous blue dress has a dress generated so much controversy. 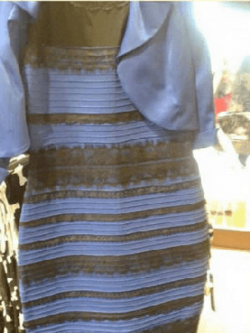 About 70% of people declared empathically that the dress was white and gold.  They took solace in two things: it felt right and how could so many people be wrong?  An equally vocal 30% of people were emphatic the dress was black and blue.  Even scientists weighed into the debate, which began trending under #thedress, and received huge mainstream and social media coverage that would be the envy of any PR company.

It looked like the global population was getting entrenched into two camps (actually, there was a third camp: those who were sooo over it).  For anyone seeking nirvana under a banyan tree in a no-Wi-Fi zone last week who missed the headlines all over the world, the dress turned out to be black and blue.

But what happened next in “dressgate” was sheer genius.  The Salvation Army in South Africa took a picture of the dress and asked on Twitter: ‘Why is it so hard to see black and blue?’   The image depicted a beautiful battered model in the dress.

The charity took a fun, frivolous issue and made a profound, succinct statement about an issue close to its heart: domestic violence. It’s a great example of brave, responsive storytelling that shines new light on a pervasive problem.

As news editor Lauren Tuck noted ‘Domestic violence is a serious issue that deserves the same kind of fevered attention that was paid to #thedress’.

How to get a job at Google

How to move other people, in one simple step