Bright ideas – where do they come from?

Mark Henderson was sitting in a coffee shop when he asked the barista what they did with the used coffee grounds. “We just put them in the bin” was the reply. Mark also found out that, the shop alone threw out about 10 kilograms of grounds a day.  He thought there must be a better way and started to research how coffee grounds could be used to produce fertiliser.

Anecdotally I also know a few people who put coffee grounds into their gardens because they have heard it’s good for gardens, but no one thought of taking it further than that.

Mark and his friend Geoff Howell did and  quit their jobs as IT consultants and set up ‘Espressogrow‘, which plans to pay coffee shops for their used grounds, and then turn it into organic fertiliser at a central manufacturing plant .  Wow, what a neat idea. As an entrepreneur I am always interested in where people’s ideas come from – like Mark’s it could be with our next cup of coffee?  The mindset that drives this is usually ‘There must be a better way’. 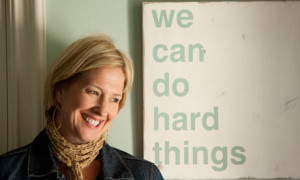 Getting your a**e kicked – the dark side of leadership

Why dodgy perfume salesmen are masters of context