Gormless in the city 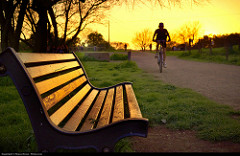 A few weeks ago I was standing on a busy, windy street corner in Melbourne: no handbag, arms akimbo and no phone to keep me busy. No, I haven’t taken up busking (god forbid!), nor was I lost. I was simply waiting for a video shoot. As the shoot was being set up, I had nothing to do. So there I was on the street corner, observing people, the traffic and the city landscape. It was surprisingly peaceful and I felt very present.
It reminded me of my childhood. I grew up in an apartment building in Bombay where it was very common practice to stand in the balcony gazing out into the world. There is an Indian expression for it, which loosely translates as watching life.

How does this relate to our business lives and time-poor contexts? Surely I am not going to suggest something as banal as stopping to smell the roses (though that’s a good idea).

A friend introduced me recently to the idea of ‘gypsy time’. Gypsy time is when you deliberately take time out of your busy workday to just hang loose: to be a gypsy. This could be having coffee while you people-watch, or even sitting on a park bench soaking in the sunshine.

The rules are simple: it’s time alone, without any technology. It’s harder than it sounds as you might get terrible FOMO (Fear Of Missing Out) without your phone. You might also look suspicious – loitering with intent and hopefully won’t be questioned by the authorities!

We might be familiar with the idea of a third space. Gypsy time is the idea of a ‘being’ space rather than a ‘doing’ space. The rewards of gypsy time are immense. Give it a try if you’re interested in being grounded rather than gormless in the city and in your work.

The pit of despair – and the perils of getting out alive

Who is the most influential person on the planet?