How leaders can elegantly reframe for powerful results Sometimes leadership comes blazing with trumpets, sometimes quietly and sometimes not at all. Unless a leader steps up into the void.

Recently India and the Indian Space Research Organization (ISRO) were ready to make history. A successful soft landing would have made India only the fourth country after the United States, Russia and China, to achieve success. India would also become the first country to complete a south pole region soft lading on its first attempt.

The entire nation was watching this historic moment live and waiting with bated breath. But during the last moments the agency lost contact with the lander. The last minute loss gutted the ISRO team. Jubilation and celebrations turned to dust. The ISRO chief K Sivan was inconsolably upset. Visible public failure after years of hard work.

The Prime Minister Mr Modi did the most powerful thing any leader could do. He reframed the situation for the ISRO Chief, his team and the entire nation. 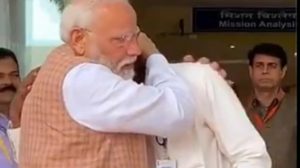 Modi said ‘To our scientists I want to say- India is with you! You are exceptional professionals…We salute you’. They needed to hear this in their darkest hour when feeling both personally and professionally crushed.

He added, ‘The best is yet to come in our space programme’. Declaring there would be ‘a new dawn and brighter tomorrow, very soon’. Giving everyone hope and optimism for the future.

Modi finished by hugging a visibly distraught Sivan, in a video that has now gone viral and taken the world by a storm.

Prime Minister Modi set the tone for what was to follow. The entire country lauded and celebrated the scientists and their efforts. The focus shifted from a near miss to a near win and hope and optimism for next time.

This is leadership in a void–where a leader steps up. A leader reframing authentically in a time of despair. Turning a desert into an oasis.

PS Just a note, I don’t vote in India and don’t have any political affiliations or agenda.